South Africa presents, as strengths, a regional economic and political powerhouse, very rich in term of natural resources like gold, platinum, coal and chromium. Then, financial sector is quite advances with a legislative environment protecting investors. On the other side, weaknesses are related to poverty and inequality as sourced of social risks like crime, strikes and demonstrations, unemployment around 29% and shortage of skilled labour, old infrastructure (transport and energy), then dependency on volatile flows of foreign capital.

Currently, unemployment is a record level achieving a little bit less of 30% and it means a very limited contribution of private consumption. At the same time, weak domestic demand is expected to continue to inhibit the manufacturing and mining sectors-

The risk of additional power cuts, which would further harm the contribution of these sectors, cannot be ruled out in 2020. Manufacturing and mining will also be exposed to softer external demand, particularly in China. In addition, the review of the country’s eligibility for the United States’ Generalised Preference System, which exempts exports to the US market from certain customs duties, threatens exports, particularly in the automotive sector. Limited domestic demand, which will constrain imports, should nevertheless allow foreign trade to make a positive contribution to growth. Difficulties at the fiscal level and at state-owned companies, which are the drivers of infrastructure investment, will remain obstacles to public investment, hindering construction. Private investment will remain hesitant in the face of recurrent social movements, high operating costs and the polarising issue of land reform, which could allow expropriations without compensation.

Inflation is expected to go up in the wake of rising electricity, food and fuel prices, but weak domestic demand should prevent a sharp increase.

Cyril Ramaphosa became President in 2018 following Jacob Zuma’s resignation and was elected at the ballot box in May 2019, after the African National Congress (ANC) took 57% of the vote. Although this result allowed the party, which has ruled since the end of apartheid (1994), to hold onto its majority, it was the lowest score in 25 years. Voter turnout, at 66%, was likewise at a 25-year low. Priorities include stimulating investment to support growth and create jobs, restructuring Eskom and resolving land reform issues. However, the social climate remains extremely tense, and could hinder the development of public policies. For instance, in 2019, the mining sector and state-owned companies were hit by a wave of strikes. Resistance from trade unions and some ANC factions could slow implementation of some reforms. In a tense social environment, where access to employment remains difficult, the security situation is strained, as illustrated by acts of violence against immigrant communities from other parts of Africa at the end of summer 2019. These attacks have created diplomatic tensions with other countries on the continent, particularly Nigeria. The business environment is relatively favourable but appears to be becoming less competitive, as evidenced by the 50-place drop in the Doing Business ranking over the last decade, mainly due to persisting regulatory constraints. 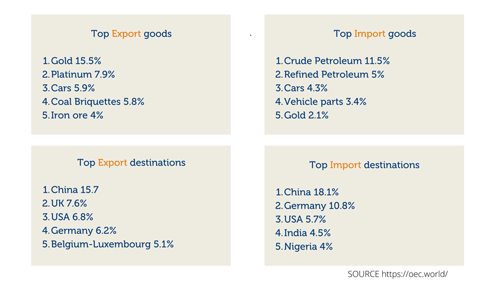 SkyMinder, is the CRIF platform allowing the global market to access commercial risk data and take better business decisions on worldwide companies. Through SkyMinder, you can access in-depth credit risk, financial and business information on over 200 million of companies over 230 countries worldwide.